Production is Like Slaying Dragons. 🐉 See how Fireball Does it.

Hello, everyone, Tom here to give you a peek behind the curtain on how things are done in Fireball. We have the first internal build of Fireball ready and we’re testing it with the team to make sure we can deliver the Early Access version as soon as possible and in great shape. With this milestone here, we wanted to share how we got here and what the future holds for our team.

As some of you know, I’m taking care of production and content direction at Fireball, and because I’m responsible for delivering the product to you, I wanted to be open and honest about how we work and why the Early Access had to be postponed. Our community is just as much a part of Fireball as we are and we’d like to open up communication about the team so you’re included more.

I hope you’ll find this unusual update interesting and useful – let’s get right into it. 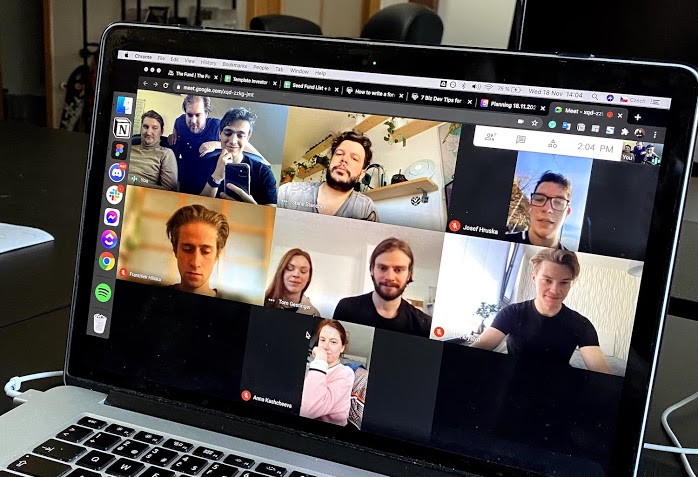 When I took over production in August, the team had been working tirelessly for months to deliver the beautiful product you were promised. We all agreed that the vision shouldn’t change, but we also agreed that it isn’t possible to deliver it on time in September. It would be easy to say that the team failed to deliver and that we’d improve in the future, but it isn’t enough for us, so I’ll explain exactly what happened.

Creative work, especially in software development, is a magical but unpredictable thing. Everything depends on estimates, which basically means team members make educated guesses about their work. I’ll give you a more interesting example in the style we all love.

Let’s say I’m your GM and you and two other players are in the middle of a campaign. You’re a dashing, witty bard accompanied by a muscular barbarian and a morally ambiguous druid who loves eating strange mushrooms, all level 12. Then I tell you all that you have to kill an Ancient White Dragon hiding in a mountain range on a remote continent in the next four sessions or the entire campaign ends, and I also ask you to explain exactly how you’re going to do it, or I will not allow you to continue playing. You’d be fully in the right to think I’d gone nuts and want you to die horrific deaths for my own sadistic pleasure.

If you’re familiar with RPGs, you’d realize that request is not only weird but also impossible to fulfill. You don’t have enough information or time, the goal seems ridiculously difficult, and it all goes against your creative minds. Can the dragon be persuaded by your suave bard? Is there a special, magical weapon the raging barbarian could use against the monster? And will those mushrooms finally be of some use to the druid? Good luck figuring that out from a tavern table. You could try to talk with the other players and put together a strategy based on your characters, equipment, and experience, but it would probably be the least fun story arc ever, and you’d have no idea if any of it would work out. Producing a game is very similar, except there’s no DM to bend the rules to help our plans succeed.

When the team was faced with this challenge during the summer, they reacted accordingly and I was brought on board to help. We saw that our Ancient White Dragon couldn’t be defeated in time, so we asked our community and investors for more time. The biggest mistake the team made was trusting that this system of educated guessing would hold up and that the estimates were accurate. We underestimated just how many variables were at play. Add in the pandemic, team changes, a new production tool migration, and it all leads to you not being able to test the app sooner. 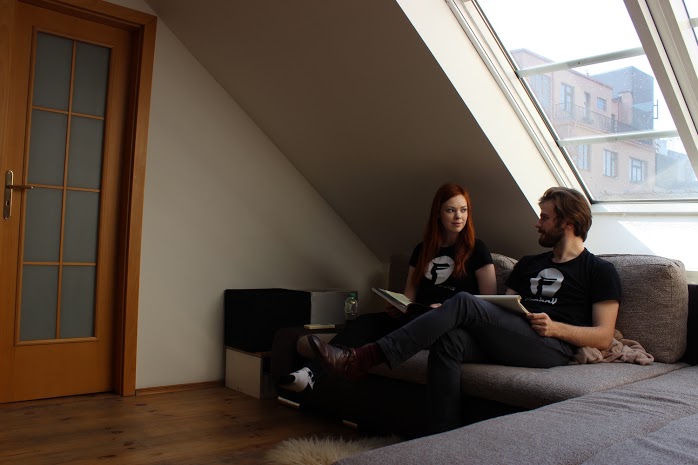 Now that we’ve learned our lesson, we’ll move forward in a different way to make sure delays and frustrations won’t happen again. We want to move away from the “waterfall” model based on estimates and set plans towards a more flexible model that’s focused on smaller goals and rapid prototyping. It doesn’t mean we’re completely changing everything – we want to land somewhere in the middle.

To go back to my metaphor, instead of focusing on planning out every step towards facing the dragon to make it in time, we want to shift focus on the process of preparation and dragon-slaying itself. We want to accept we can’t know exactly what is going to happen when, and instead make sure we’re always making the right decisions to reach our goal. If the DM throws a sneaky Rakshasa at us, it’s much better to be ready to shift priorities, send the fiend to hell (literally) and then go back to the looming dragon threat, instead of pushing ahead with a monster right behind us just because we agreed to do it before. Perhaps the Rakshasa has some useful loot that will help us in the end anyway since experimenting usually leads to great rewards.

What does this mean for you? It means we’ll communicate more openly about production. The deadlines for specific releases in the future will never be 100% concrete and maybe not even announced until we know for sure we can deliver, but you’ll know how the cogs are turning inside. I’m convinced it will lead to a better flow and even faster production than we would otherwise have and it will ensure a happy team doing something they love. 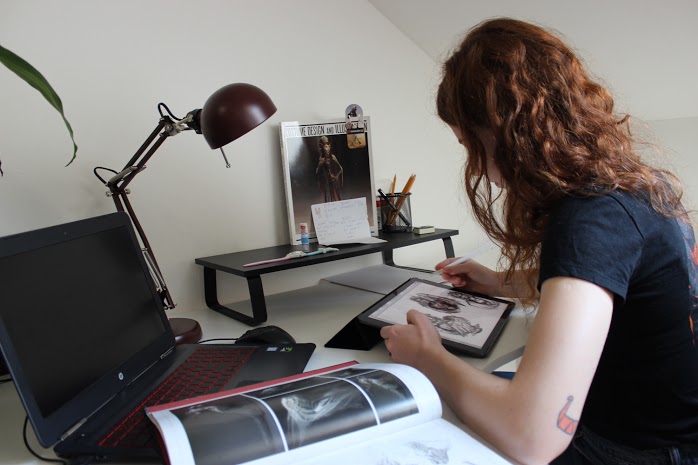 Now that I hopefully explained our approach, it’s time to talk about what it leads to. Early Access is getting close and we’re beyond excited to see how all of you react to the app.

Creating content for Fireball is a challenge for various reasons, but the biggest one by far is the volume of stuff needed. We could be writing and drawing for millennia and there would still be room for more – imagination is endless, after all. With that in mind, we had to come up with a good direction, which ended up being your freedom. Because roleplaying is about your own imagination and experiences, we want to make sure you have enough resources to create whatever you desire.

This approach led us to create “baselines” for different types of content. We’re not fully prioritizing one aspect of the game. We’re creating a baseline for everything with options for homebrew instead. You’ll have access to monsters, items, spells, magical artifacts, great character customization, a campaign setting with compelling lore, and more. We could have cut some parts of this workload and just focused on having lots of monsters, for example, delivering magic items and lore later, but that approach would hurt your freedom way more. A game master can whip up a custom monster that could be missing in our bestiary in a few minutes, but if we don’t provide you with a whole section of the game, your own creativity is being limited.

With our direction clear, we’ve been working hard to deliver and try out the best ways to give you all the freedom and fun you deserve. A whole new world hungry for adventurers is rising from the primordial elements of amazing writing and wonderful art and we’re taking steps to open it to you. You can expect more content-related info and options to give us feedback on our social media and Discord, and in the app itself of course, so stay tuned.

And that about wraps it up. Thanks for your patience if you read the whole thing. I hope you found it interesting, and don’t be afraid to say hi on Discord! 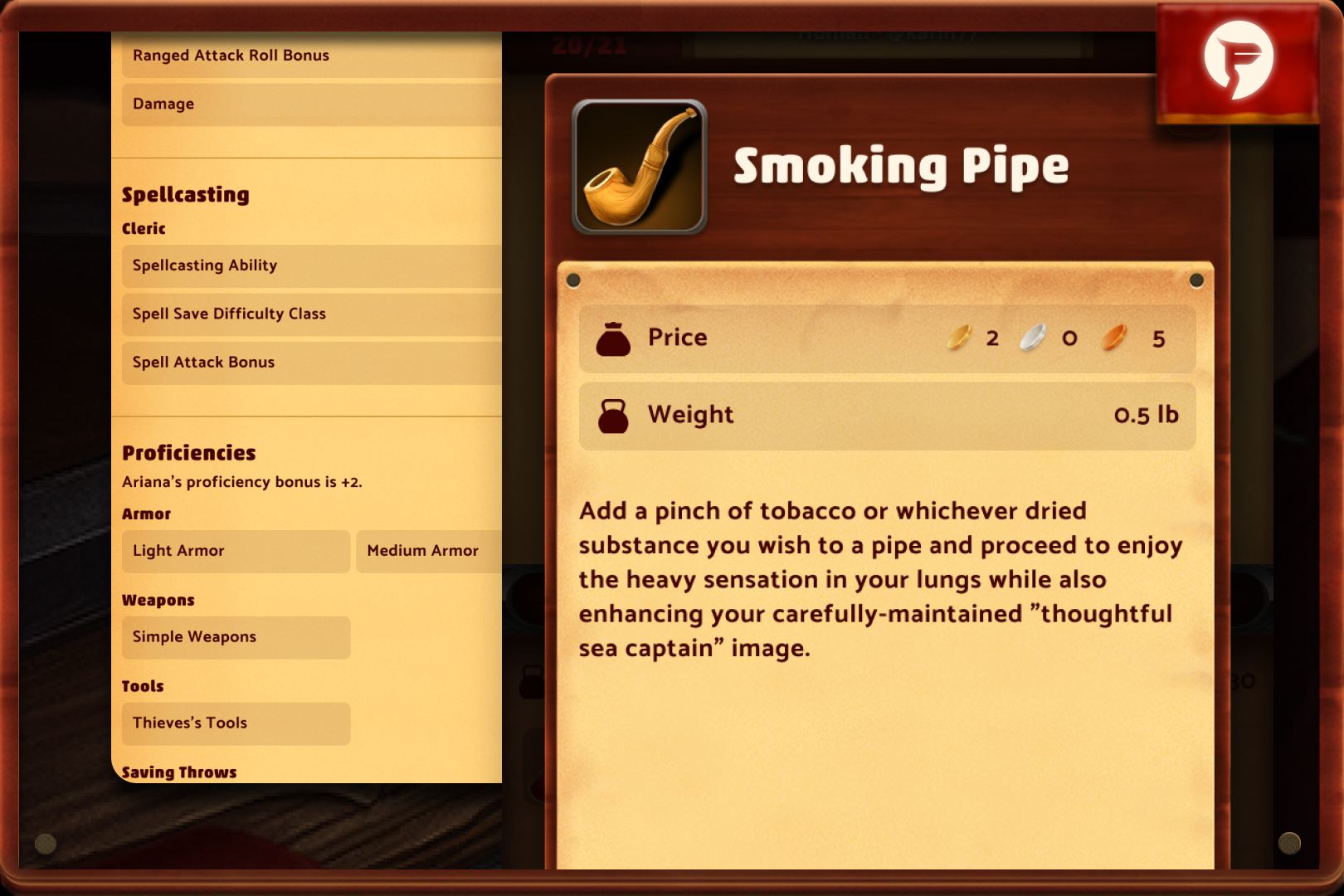 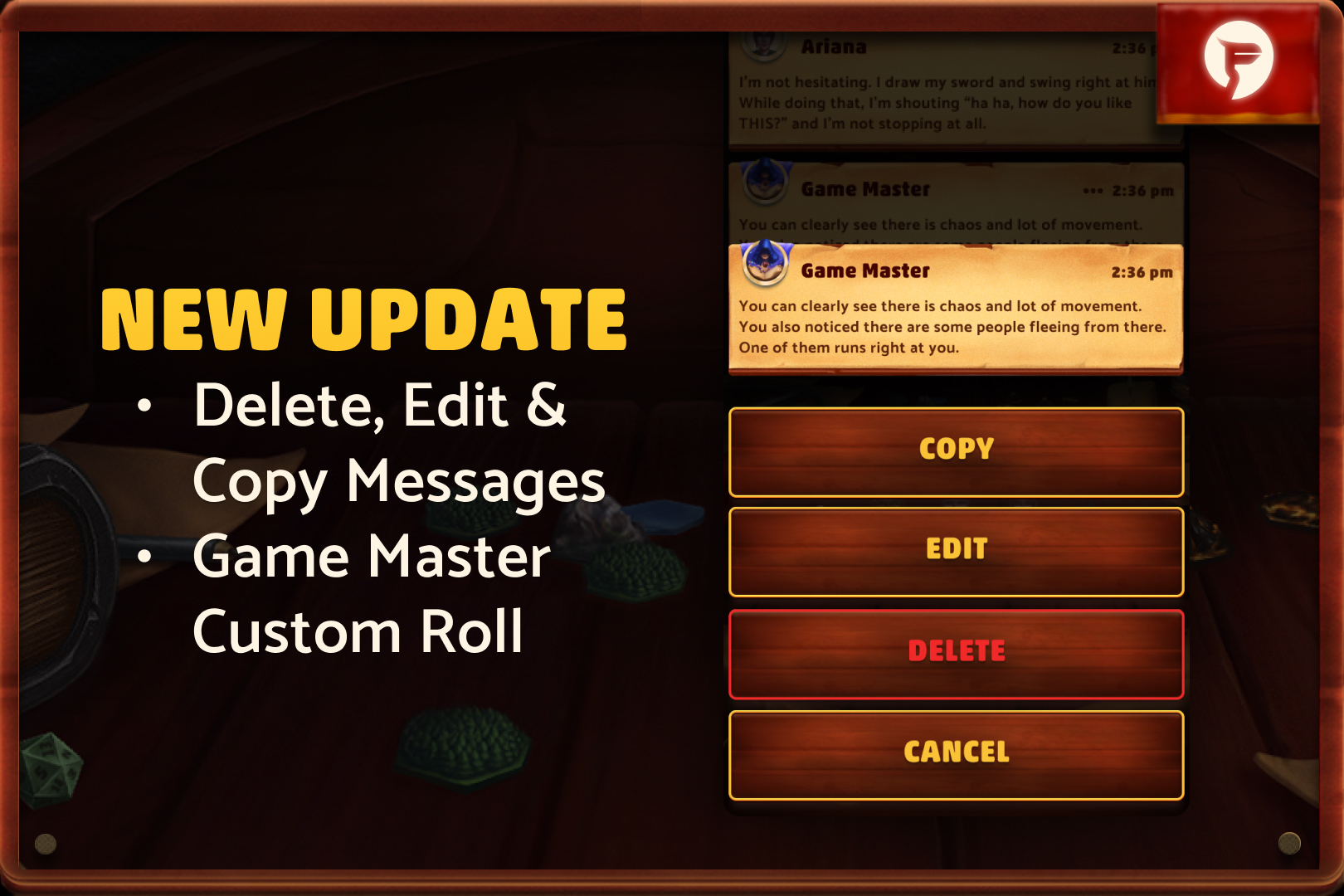 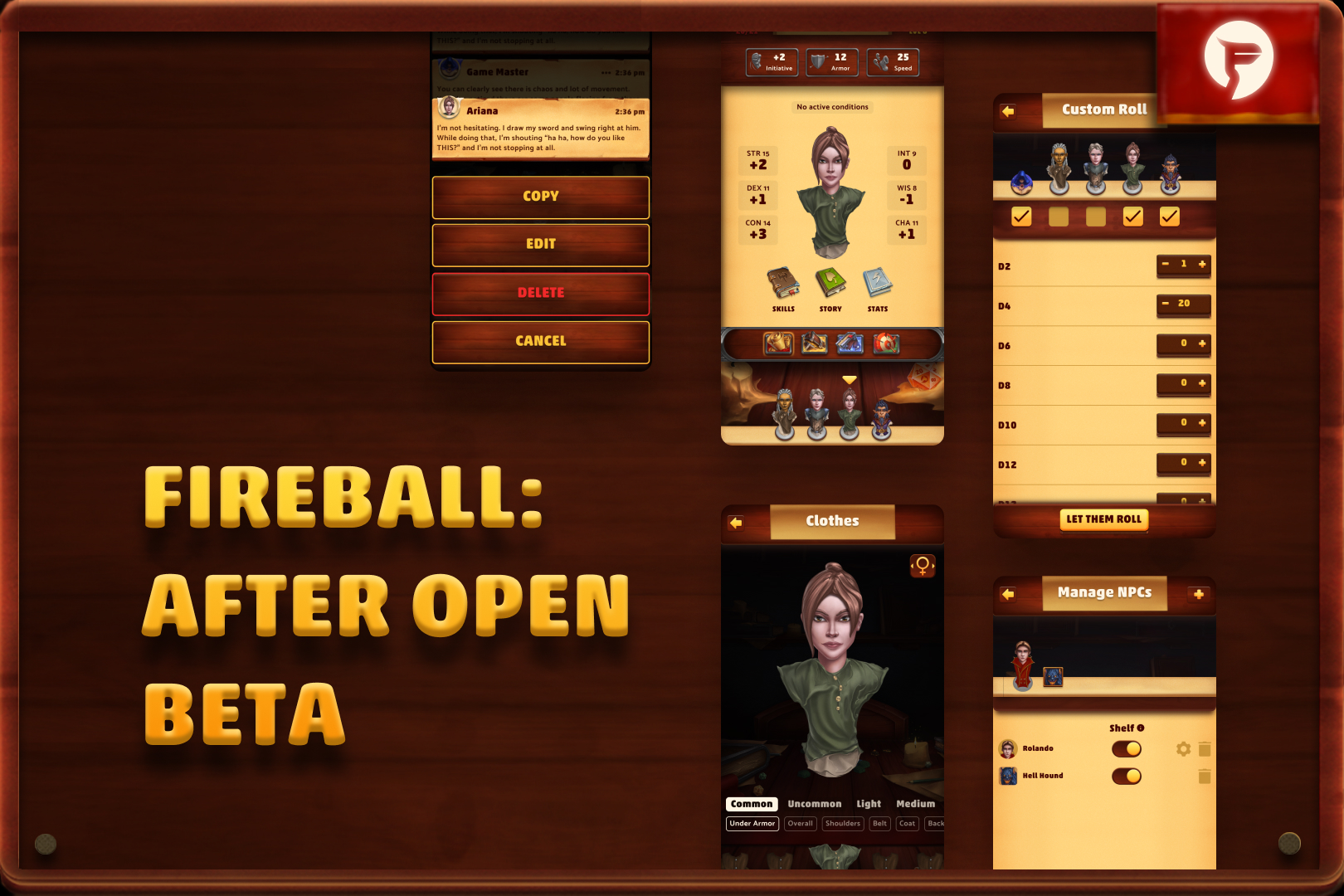 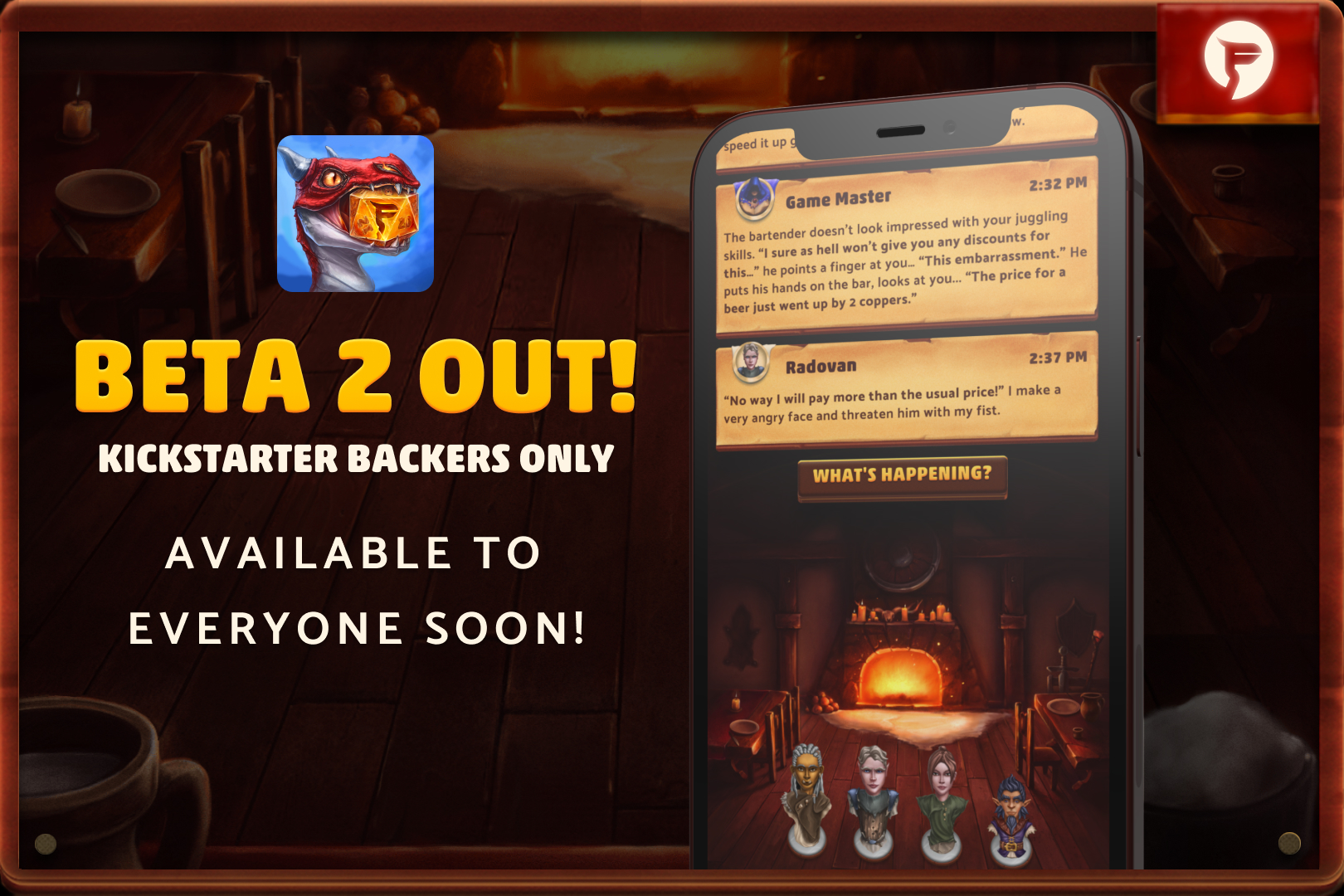 Let’s Go on an Adventure! 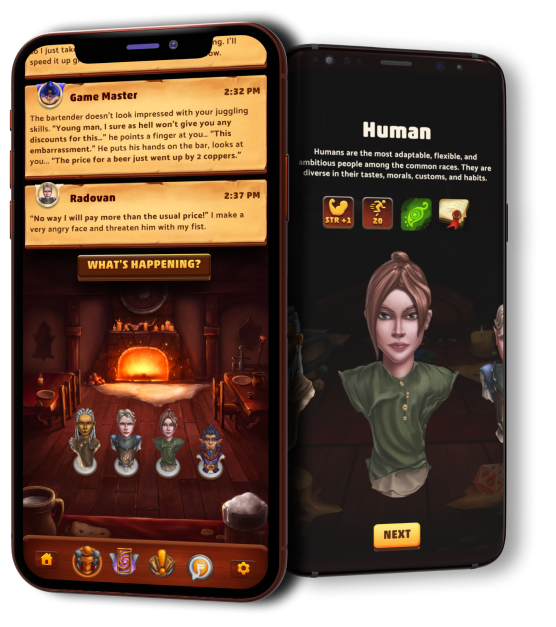 Check Out What Is Going to Be in the Next Update! 🔥 New Features and Content!...
Scroll to top