Stellar Awakening is a short one-shot adventure that combines both fantasy and science fiction in a thrilling tale where players wake up on an unknown planet and tackle obstacles to find a way home.

Stellar Awakening is a short one-shot adventure that combines both fantasy and science fiction in a thrilling tale where players wake up on an unknown planet and tackle obstacles to find a way home.

Tap on images below to see their details. 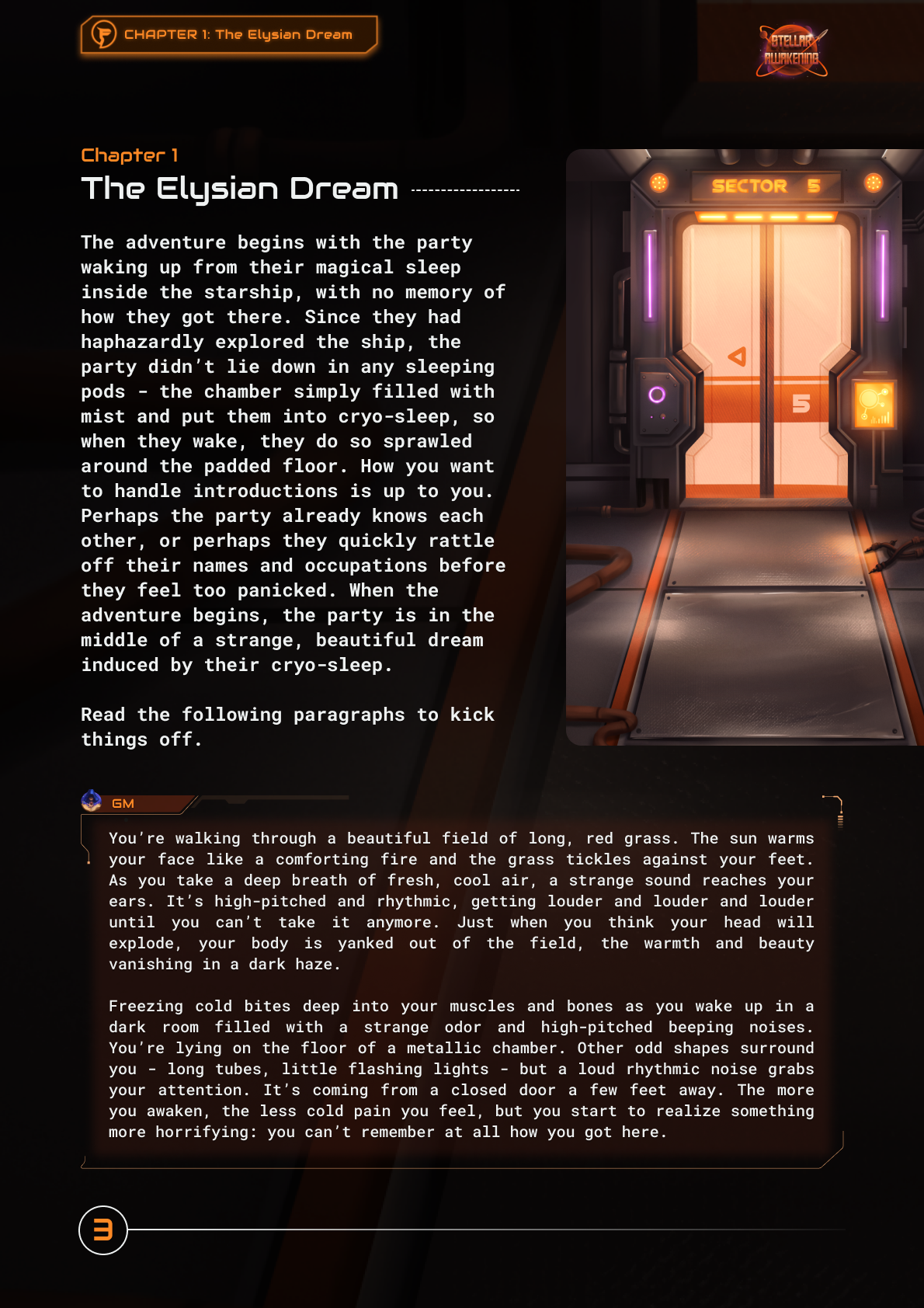 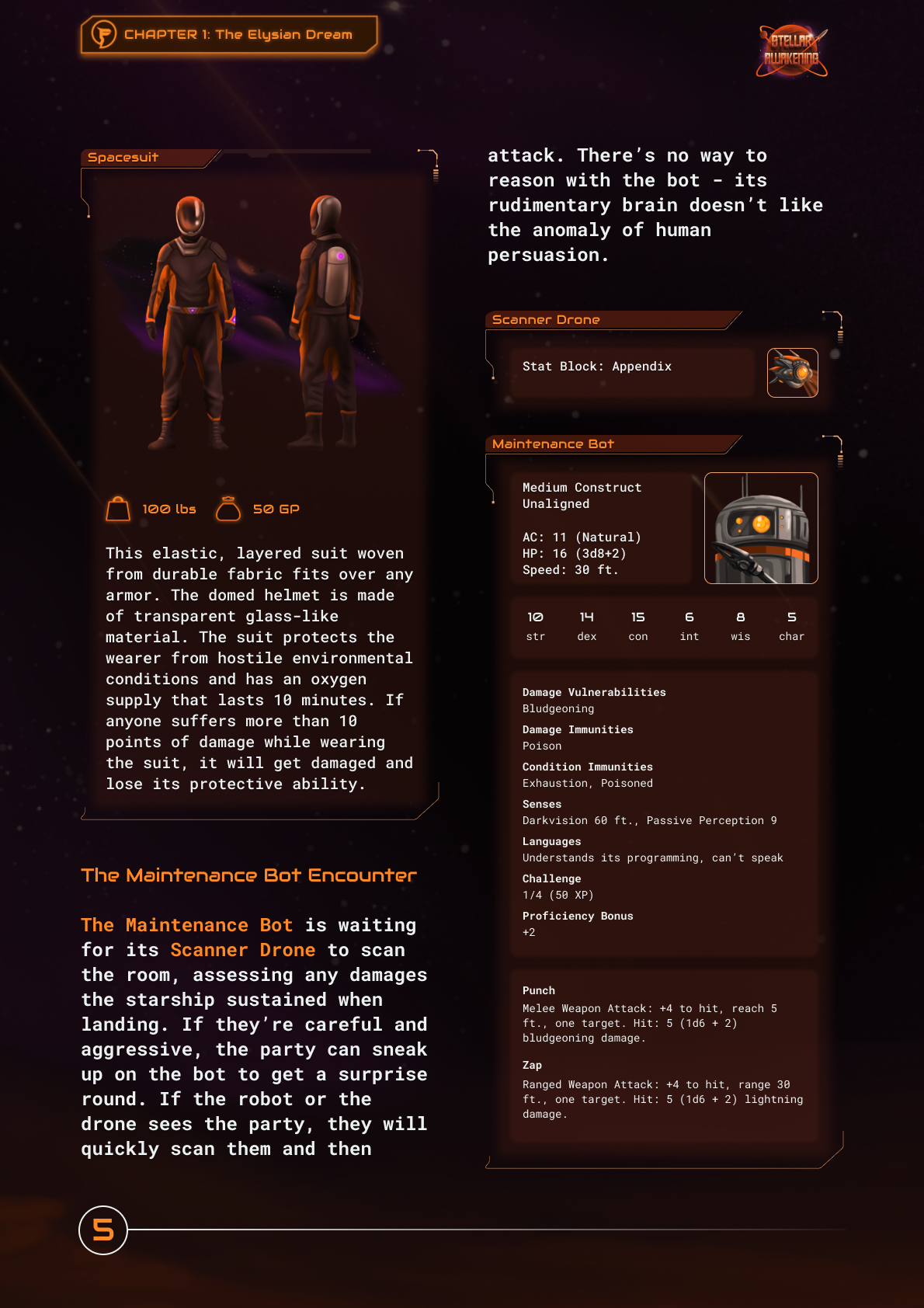 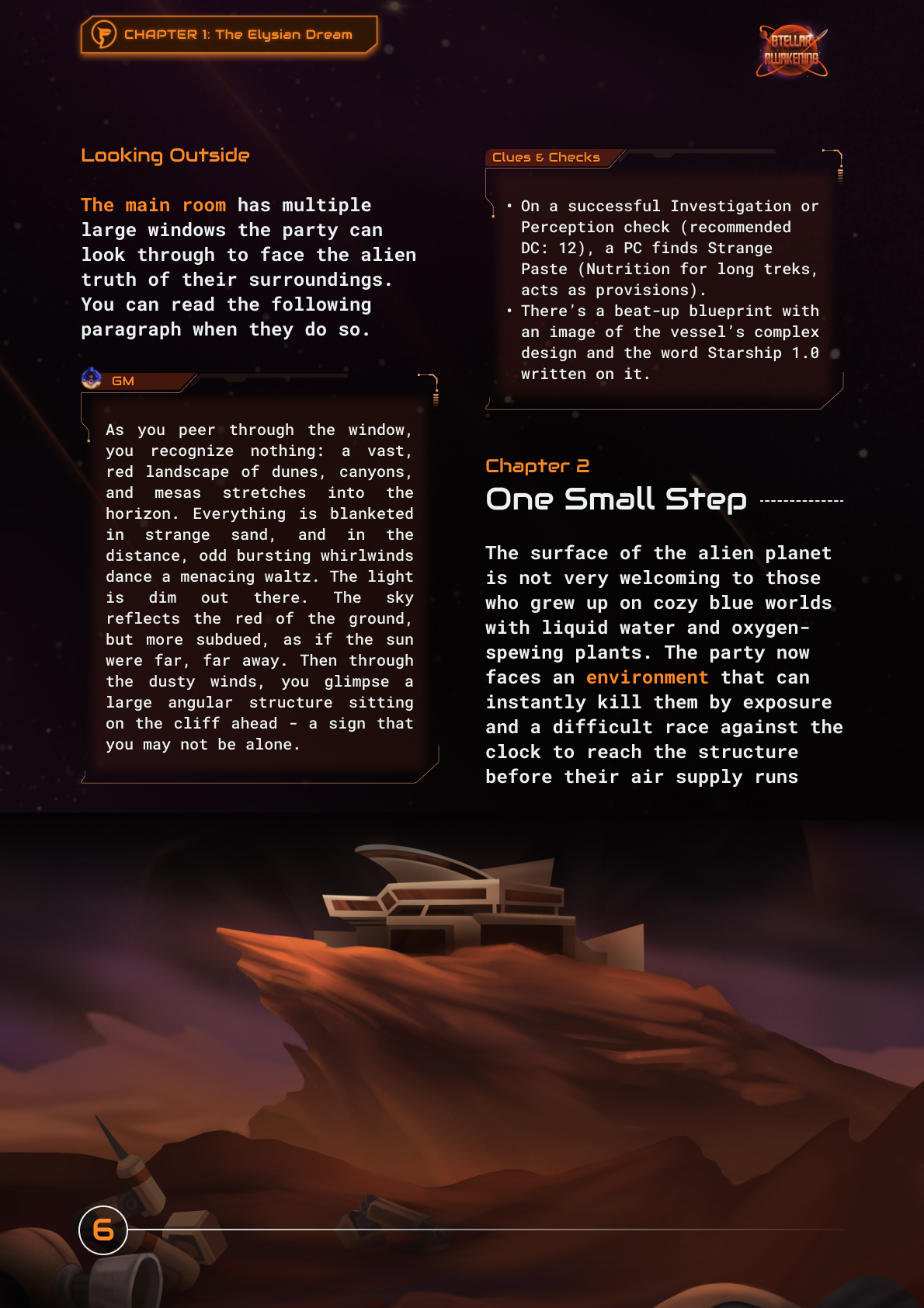 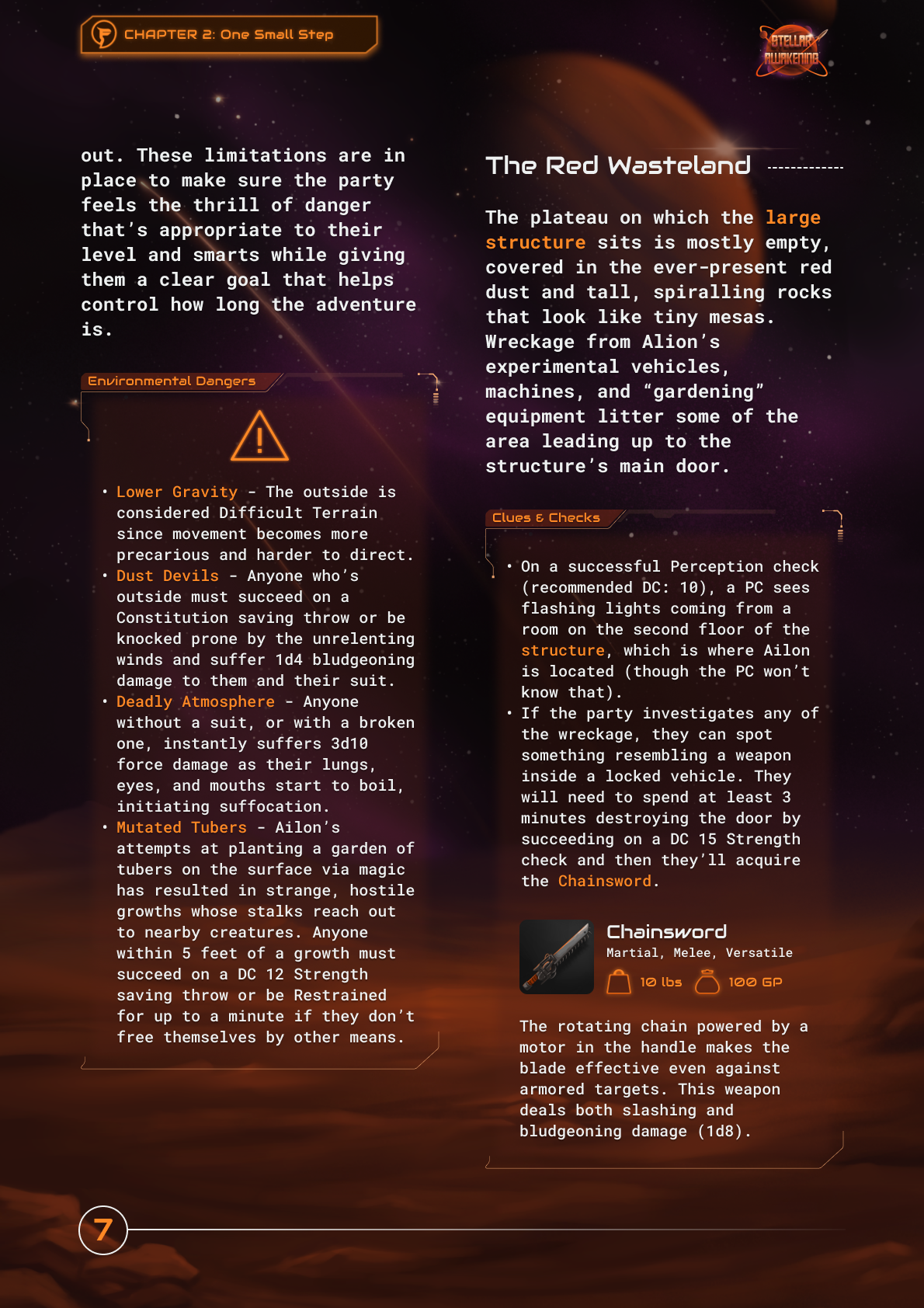 Elven artificer Ailon has always been fascinated by the cosmos and its boundless opportunities. He’s dedicated his life to developing ways to reach or even inhabit other planets using his two loves, arcane magic and science. When he created vehicles that could travel in the dangerous vacuum of space and safely land on celestial objects, he found his golden ticket.

Leaving his home world, Ailon settled on the barren red planet known as Astartus, where he continued his research on terraforming, so he could reach his goal of creating a habitable paradise – a bonafide Elysium – on the harsh red planet.

Every developmental process has its problems, of course. One of Ailon’s experimental inventions, a self-driving starship that can shuttle citizens between worlds, unfortunately, had a recent malfunction. The ship drove itself back to the big blue cradle of humanoid life where a group of curious adventurers explored it in the wild, not knowing anything about the alien machine. The ship sealed them in and froze them in magical stasis, just as it was designed to do for longer voyages, and took them back to Astartus.

This is where our adventure begins: can the party figure out what happened and get home, or will they perish among the stars?

We hope you’ll have a really good time with your friends playing this adventure!

It’s completely free as a gift from Fireball Studios to you. Can we maybe ask you just one little favor?

We would love to play this adventure with Elon himself! But he is probably the busiest person in the world. Scheduling a session with an ordinary Joe is hard. Imagine Elon Musk.

Can you please help us to get his attention? All we’re asking you to do is to tweet this:

“Hey @elonmusk! You like D&D right? @honzaroose and his friends put together a short Mars-based adventure and they really want to play it with you. :)”

Bonus! Send us a screenshot of the tweet to info@fireballrpg.com, and get Early Access to our role-playing app Fireball.

Get the Adventure Now 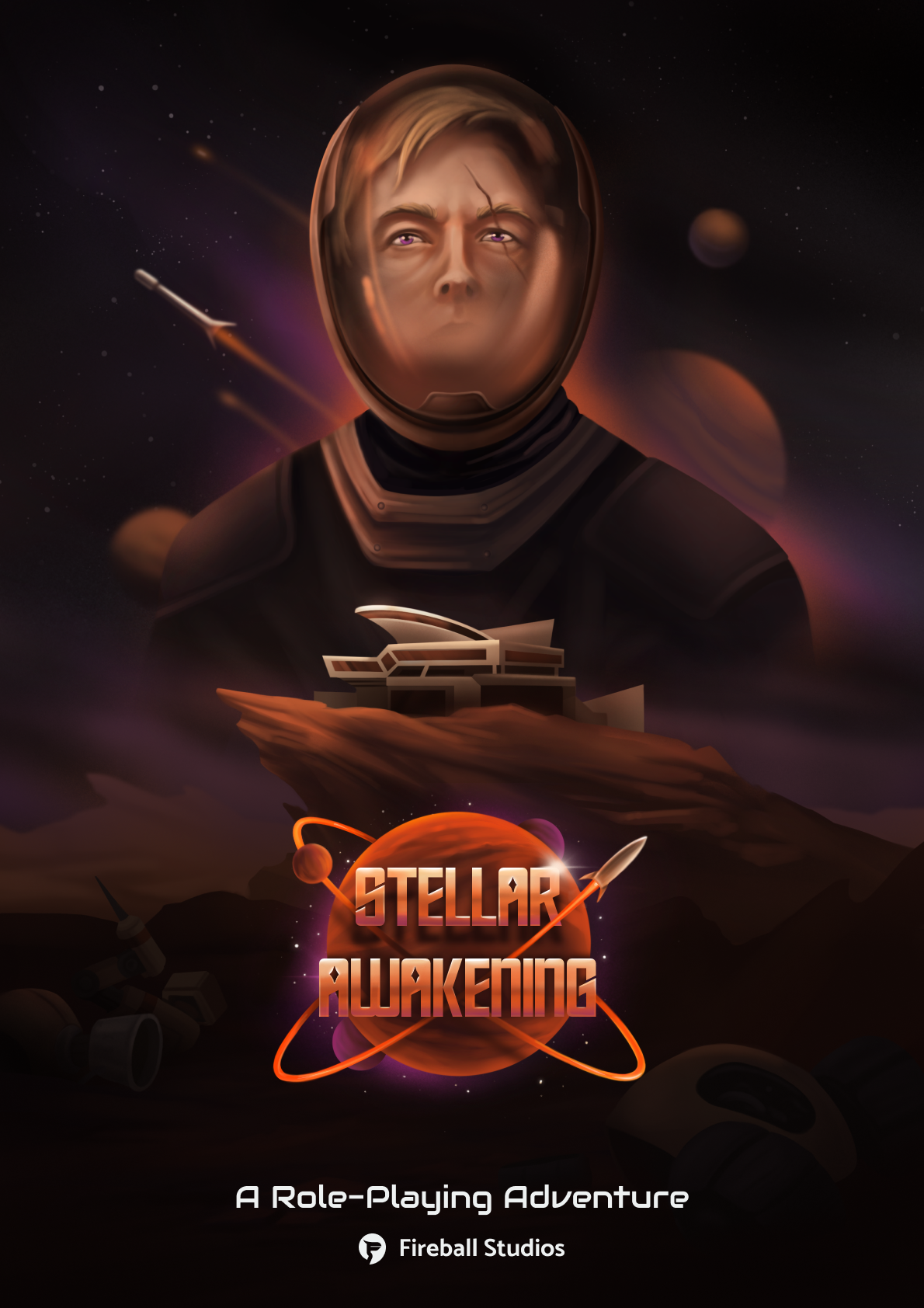